I’m having a hard time finding the right word or phrase for the title of this post.

Lucas’s current obsession is balls. It has been high on his priority list for a while now, but within the last couple weeks this ball obsession of his has sky rocketed. It’s the funniest thing. He pretty much always has a ball with him. We have, probably, I don’t know, 20 in this house. Football (three) basketball (four) bouncy balls, rubber balls, craft balls, balls that go with a toy, whatever. They are the best toy ever invented and I’m seriously tempted to get rid of every other toy in our house, because they’re only good for one thing right now, and that’s collecting dust and cluttering up my otherwise small(er) house.

None of these pictures are staged. This is literally how it goes. A ball goes with us to the gym, in the car, to the hockey game, to bed, to lunch, to the shower, to a friends house… you get the idea. 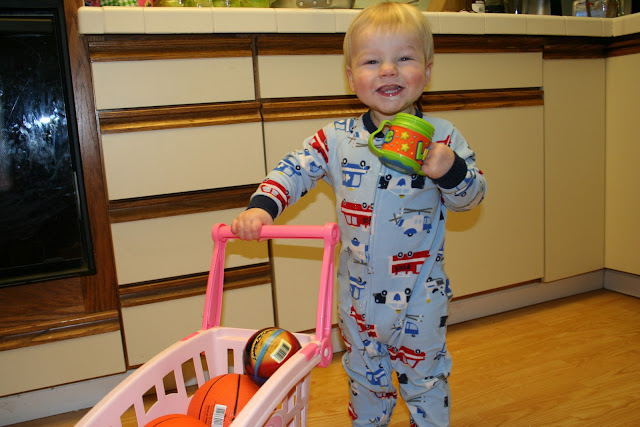 Pushing his balls around in his (pink) shopping cart. Typical morning around here. 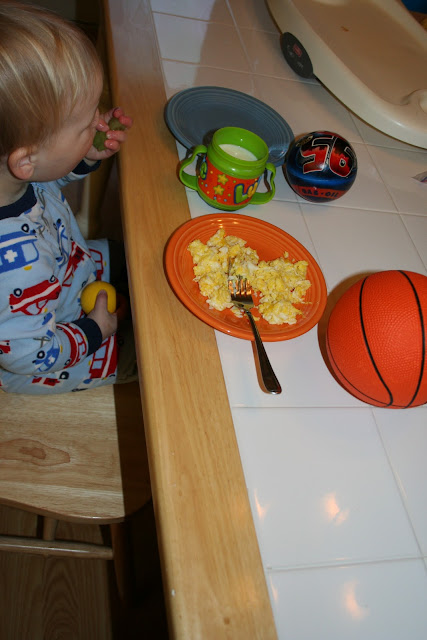 While eating breakfast. You’ll notice the two on our kitchen table, but also one in his hand.

I am getting so sick of the word ball or balls. It is probably now my least favorite word because I say it 50 thousand times a day. Get your ball, put your ball away, don’t throw your ball, okay what ball do you want to bring with us, no you only get one ball, do you want to sleep with this one or this one, lets put your ball right here for a minute…    oh my word. 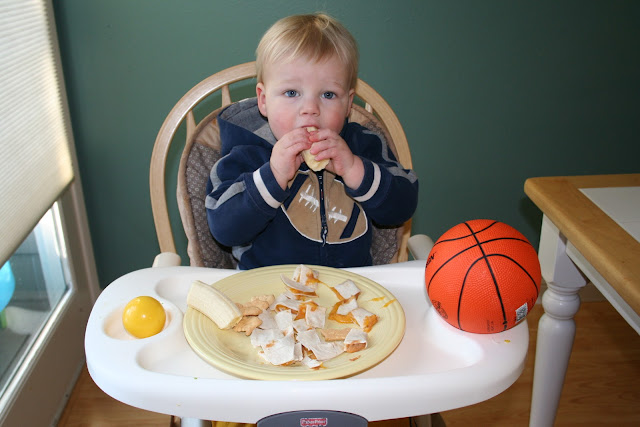 At bedtime. He takes one, sometimes two  to bed with him. I take them out of his crib before I go to bed. I’m such a meanie, he wakes up…. BAAAAAAAAAALLLLLLLL!!!!!

You know, whatever makes you happy. I’ll take a ball (or 42) over an electronic annoying device any day. For his birthday we were/are going to get him a basketball hoop…. or I don’t know, we have thought about it. I think though that it will be another thing that he plays with for five days and then gets sick of it. However, right now he’s using the hole in his play kitchen (like where the plastic sink is suppose to go) as a “hoop” and throws his basketball in there. Ha. It’s funny… and loud when it misses and bounces off the wooden sides. So maybe he would really like it and get some use out of it. I’m sure it would match my living room decor very nicely. His birthday is tomorrow…. nothing like waiting for the last minute for a little birthday shopping, huh?

Another thing? Every time I say something like lucas where are your balls? Or pick up your balls. my husband chimes in with a funny (to him) joke. So awesome. Apparently I need to provide him with more man time so he can drink beer and crack hilarious jokes to his buddies.

Do I have two boy children? And a husband? What am I going to do with myself?

Do your boys love basketballs and footballs too?

What do you think of The Bachelor this season? I mean, who do you think’s going to “win?”  (What an awful, awful, degrading show. Who watches this stuff?)

Are you as ready for summer as I am?!

5 thoughts on “His Current Favorite Toy (or Obsession, however You Want to Put It)”